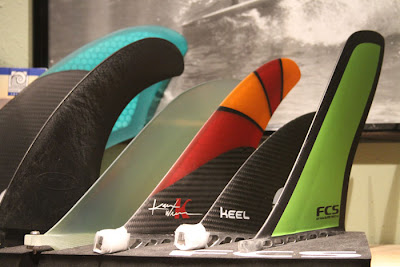 Fins are a very important part of the Stand Up Paddle Board.  Without them you would probably spin in circles.  Most manufacturers do a good job of matching the fin to the SUP board but understanding how your fin or fins work will help you decide what fin you want to use on your board.


All-around SUP boards and stand up paddle surfboards have fins and fin systems that come from the surf side of the sport (more on that in a second).  The size of the board reflects the size and number of fins on the board.  With a single fin setup, the fin will be larger than if you are using a three fin or two plus one configuration.   This is because the surface area and holding power needed comes from only one fin instead of three.  How much surface area needed depends on the size and type of board, on the conditions you are paddling in and your personal preference.  The center fin on a three fin board will be the same as the outside fins and on a two plus one setup, the center fin is larger than the outside fins but smaller than that of a single fin setup.  Some boards with a two plus one setup will allow you to remove the outside fins and change the center fin to make it a single fin board.

The difference between single, twin, three fin and quad setups is a topic for another blog post but briefly, single fins provide the holding power to keep the tail of the board from sliding around and the muti-fin systems do that and a lot more.  They provide the rider the ability to generate speed by forcing water through the fins.  Some three fin setups are called Thrusters because you can thrust water through the fins and go faster on a wave.  Multi-fin setups are very useful in surfing because of the dynamic interaction with the rider, the board and the wave.  However multi-fin systems add drag and that works against flatwater stand up paddling.  The fins, other than the center fin on a multi-fin board are not pointed in the direction of travel.  They have a certain amount of cant.  That means they are angled towards the centerline of the board and not in the direction of travel.  The more cant or angle, the looser or the easier turning ability the board will have, but the more drag the board will have as well.  Drag is not felt as much while paddle surfing because you are using energy from the wave but for flatwater paddling, drag is bad.  Boards that are designed for flatwater paddling will only have a single fin setup.

We are seeing more touring and race SUP boards coming with a flatwater style of fin.  However many people use all-around boards for paddling away from the surf and very often these boards come with a fin that is designed to be used in the surf.  This is where you can change the fin and dramatically change the way the board behaves.  A flatwater style of fin will help a board track much straighter.  This is a very desirable feature to have when paddling across a lake.

There are many new flatwater fins on the market but they generally can be grouped into three types.  Touring, racing and downwinders.  Touring fins are designed with one thing in mind.  Keeping the board going as straight as possible.  They do this by extending the horizontal dimension of the fin.  A large base and much of the surface area of the fin reaches back to make it difficult for the fin to pivot.

SUP race fins are a compromise.  They are designed to help the tracking ability of the board while also allowing it to maneuver amongst competitors and, more importantly, make a turn around a buoy.  They fall somewhere between a surf fin and a touring fin shape wise.  Quite a few SUP race fins are made of carbon fiber which allows them to be thinner to cut down on the drag yet keep their effective stiffness.  Carbon fiber as well as hexcore and other similar materials makes for lighter weight than the solid fiberglass that is traditionally used to make fins.

Downwinder SUP fins are the most unique.  They get their surface area by reaching much further into the water and have an even smaller horizontal component than surf fins.  The principal is that you want to keep the board from spinning around in rougher conditions where the tail is lifting out of the water.  You also don't want a large profile that would cause the rougher conditions to put side pressure on the fin and make the board unstable.  And the relatively vertical orientation also helps the board remain maneuverable to make the small adjustments in the direction needed when traveling with the wind.

Many SUP enthusiasts will change fins often depending on the conditions.  You can race your BARK Dominator with a FCS Slater Trout in the morning, take a casual cruise across the lake with your TruAmes SWT fin for lunch and then put the Future Downwind 13" for the afternoon downwinder session.  One board, three fins and a whole lot of fun.

Or, you could surf your all-around stand up paddle board with the three fin set up it comes with in the morning and then remove the side fins for a flatwater tour in the afternoon or, better yet, switch it out for a TruAmes SWT fin for even straighter tracking and less drag.

We hope this info helps you to understand when and why you might want to switch  your SUP fin set up and, more importantly, helps you to have more fun on the water.


Email ThisBlogThis!Share to TwitterShare to FacebookShare to Pinterest
Posted by supBEND at 11:36 PM

Visit the Stand Up Paddle Bend Online Store for all your SUP Needs!

Whether you want to win races, surf big waves, shoot rapids, shape up, just cruise, or do a little of everything, you can trust us to help you pick the right board the first time around.

Having the right paddle is as important as having the right board - maybe more. We carry the best paddles on the planet and will help you choose one that fits your hand, budget and style of paddling. 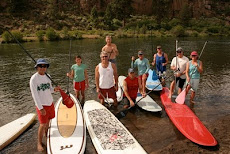 Links to other SUP Sites 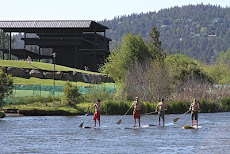 Check out our Online Store! Free Shipping on all Orders Over $100! No Sales Tax!

At StandUpPaddleBend, our mission is to serve and unite Central Oregon's stand up paddling community. Please let us know what you'd like to learn about and we'll include it here.

Paddle Trail Alliance Deschutes River Guide Available Online and In Store. Use it to plan your trip, avoid hazards, and stay on calm water… or not! It's your trip. Aerial photo credit: Buck Heim